The prehistoric looking Shoebill has, for a bird, exceptionally large feet: the middle toe reaches 17 to 18,5 cm. These feet assist the bird to stand on aquatic vegetation while hunting its prey, mainly fish.  Another striking feature of this bird is its huge boat-like bill, which allows it to prey on large fish and other water-dwelling animals. 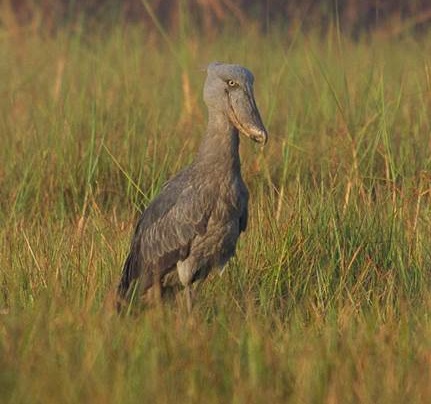 However the aquatic environment where the bird likes to reside is under pressure. The Shoebill lives in the extensive freshwater swamps of eastern-central tropical Africa. The total population is estimated at less than 8,000 birds, and is declining in several areas of its range. Human interference is an especially big problem for the species. A combination of factors is threatening the sensitive Shoebill and the wetlands where it resides: from live bird trade in various countries, to agricultural developments in western Ethiopia and oil extraction in South Sudan.

In order to halt and reverse the decline of the Shoebill’s population, our partners Nature Uganda and Associate Expert Tim Dodman made a new conservation action plan for the African-Eurasian Waterbird Agreement (AEWA), identifying the main threats and formulating actions to address them.

As part of the 50th International Waterbird Census (IWC), a gap filling census will be performed in January 2016 in the wetlands along the shores of Lake Albert, Uganda. Oil projects are planned in these areas and it is important to identify sensitive locations where impacts should be avoided.  It is hoped that Shoebills will be recorded and that these counts will help efforts to conserve this magnificent bird.

The IWC is a worldwide program. Its 50th anniversary will be celebrated around the world and we hope to make this count a very special one, with as many volunteers participating as possible! Would you like to join? Find out how you can help us count!