#DamBusters, a documentary exploring why river heroes from across Europe are working to remove dams, has now been released worldwide. The 73-minute feature length documentary is hosted by the environmentalist Pao Fernández Garrido from World Fish Migration Foundation, who commissioned and co-produced the film with WWF and Magen Entertainment. Wetlands International Europe co-funded the production. 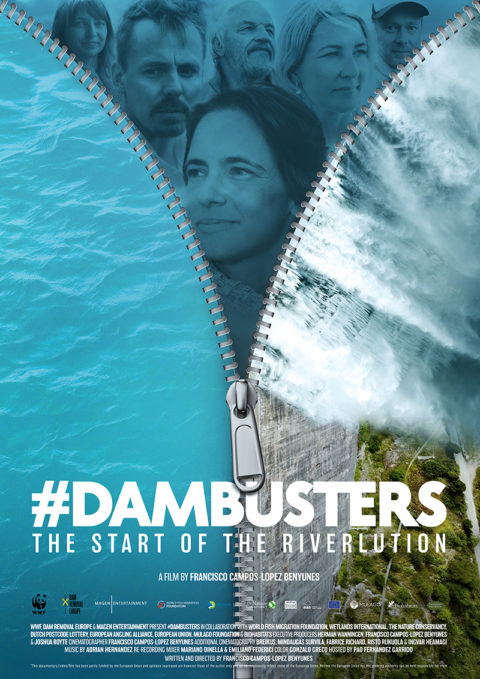 The notion of removing barriers in rivers started in Europe during the 80s. What was then a far-off dream of a handful of environmentalists became reality as dam removal, an often vital ingredient in river restoration, started to take place all over Europe. European rivers are among the most interrupted ecosystems in the world and freshwater biodiversity is decreasing at an alarming rate, with a decline of 93% in European migratory freshwater fish populations in less than 50 years. There are currently more than 1.2 million barriers in European rivers and 150,000 of those are obsolete. But it is not too late to reverse human harmful actions on the planet. River restoration actions like dam removal are a powerful tool for bringing rivers back to life and reinstating the habitats of countless amazing species and the livelihoods of entire communities.

The film, directed by Francisco Campos-Lopez Benyunes, was premiered at the European Rivers Summit in Brussels, a gathering of river and environmental activists and scientists from across Europe and beyond, organised in 2022 by Wetlands International Europe, EuroNatur, GEOTA, Riverwatch and WWF Adria.

Get to know more about #DamBusters at www.dambusters.net

Dam Removal Europe (DRE) is a coalition of 7 organizations: the WWF, The Rivers Trust, The Nature Conservancy, the European Rivers Network, Rewilding Europe, Wetlands International, and the World Fish Migration Foundation. The ambition of DRE is to restore the free-flowing state of rivers and streams in Europe. In that respect, DRE aims to establish barrier removal as a restoration tool and to mainstream this practice. More information: www.damremoval.eu

Wetlands International Europe is supporting #DamBusters with funding from the LIFE programme of the European Commission.