Wetlands International, CARE Nederland, Cordaid, the Netherlands Red Cross, and the Red Cross Red Crescent Climate Centre, said today they were deeply concerned about the increasing risks climate change poses to people, reflected in the latest report by scientists on climate impacts. The agencies welcome the reference to the value of ecosystem-based adaptation. 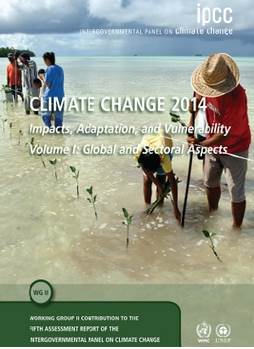 The new report, from Working Group II (“WG II”) of the Intergovernmental Panel on Climate Change (IPCC), on impacts, adaptation and vulnerability was released in Yokohama, Japan.

The entire second section of its Summary for Policymakers is devoted to risks and opportunities for adaptation. “Increasing magnitudes of [global] warming increase the likelihood of severe, pervasive and irreversible impacts,“ it says. The report mentions “risk” more than 230 times, compared to just over 40 mentions seven years ago in the WG II contribution to the IPCC’s Fourth Assessment Report.

Increasing recognition of ecosystem based measures

The assessment report, featuring mangrove restoration as its front cover photo, pays increased recognition to the role of water management and ecosystem based measures for climate change adaptation. In its section on adaptation, the new summary says: “Engineered and technological options are commonly implemented adaptive responses, often integrated within existing programs such as disaster risk management and water management. There is increasing recognition of the value of social, institutional, and ecosystem-based measures.”

“The increased emphasis on risk to people and ecosystems in this latest report by scientists on possible climate impacts worldwide is a reason for great concern,” said Juriaan Lahr, Head of the Netherlands Red Cross.

Jane Madgwick, Chief Executive Officer of Wetlands International, said: “Over the past few years, we have demonstrated together with our humanitarian partner organisations, how taking an ecosystem-based approach is key to build community resilience to natural hazards.

We’re glad that IPCC is calling attention to the value of such measures as part of adaptation and disaster risk reduction strategies and investments.”

‘The impacts of water related disasters such as droughts and floods are increasing in frequency and intensity. This calls for investments in the restoration and adequate management of wetland ecosystems such as coastal mangrove forests, estuaries, lakes, floodplains and for river basin scale solutions. Such investments can reduce the impact of water related disasters, are often more cost-effective and allow more adaptability than technical infrastructure solutions such as dams and dikes. A combination of both – so-called hybrid engineering – can be the most optimal solution.

Wetland ecosystems play a fundamental role in the water cycle, and they are the most rapidly degrading ecosystem on earth. Poor water and wetland management is therefore akin to accumulating risk in a society which is already water insecure”.

A table in the WG II report shows “key risks” by geographical region and strongly echoes many of the climate-related emergencies that environmental, humanitarian and development agencies, have been working to address in recent years:

According to Maarten van Aalst, Director of the Red Cross Red Crescent Climate Centre and an IPCC lead author: “More than ever, we need to embark on plausible – and adequately funded – early-warning and resilience-building measures, starting with the poorest and most vulnerable parts of the world.”