Hydropower plants are one of the main causes for the decline of numerous fish species in the Mediterranean region. This is the result of a new study commissioned by nature conservation organisations EuroNatur and Riverwatch, together with Wetlands International Europe, GEOTA and WWF Adria. In total, 251 endangered freshwater fish species along with their stock situation in rivers in the Mediterranean basin were recorded. The impact of existing and planned hydropower plants on these populations was also evaluated. It is the most comprehensive survey of its kind in Europe to date.

“Hydropower plants are one of the main causes for the increasingly long Red Lists of fishes”, stresses Dr Jörg Freyhof, author of the study and renowned fish expert. “From a species conservation perspective, it is imperative that further expansion of hydropower, particularly of small hydropower, is stopped. Instead, remaining free-flowing rivers must be protected and already obstructed ones should be restored to their natural state. This applies not only to the Mediterranean region, but to watercourses throughout Europe.”

“The European Commission has recently proposed to step up efforts to protect freshwater ecosystems through restoring at least 25,000 km of free-flowing rivers. This commitment should go hand in hand with protecting rivers from further degradation by the construction of new dams. The EU Water Framework Directive is fit for this purpose and should be enforced by the Commission if we want to have healthy fish populations such as the European eel”, says Eef Silver, Policy officer Water & Rivers at Wetlands International.

“Our key demands are clear: no further financial support for hydropower, and, in particular, a halt to subsidies for small hydropower plants. This study is further evidence of the destructive potential of hydropower – a form of energy production that has been wrongly labelled as green for too long”, says Gabriel Schwaderer, Executive Director of EuroNatur Foundation. 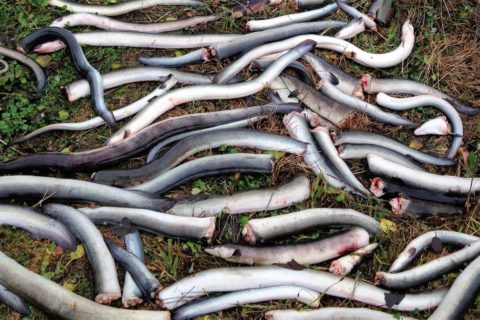 Eels are very vulnerable to turbines and water extraction. River connectivity and healthy wetland habitat are crucial to their survival © Frode Kroglund

The study: 251 already endangered freshwater fish species in the Mediterranean Basin are subject of this study. The Iberian Peninsula, France, parts of the Balkans, the Middle East, Egypt and the countries of the Maghreb were all geographically surveyed. Find the complete study at https://balkanrivers.net/Threatened_Fish_MedBasin.pdf (study in print quality available upon request)

Header image: hydropower plants, especially small plants, are one of the main causes for the long and increasing Red List designations of fishes. If the expansion is not stopped, 186 fish species in the rivers of the Mediterranean region will be pushed further to extinction © Amel Emric