The construction of hard barriers in many of Europe’s rivers means that few can claim to be genuinely free-flowing anymore. This has had serious implications for a number of migratory fish species such as eel and salmon. A key area for river restoration must be to try and improve the connectivity of rivers along their course. However, a reliable knowledge base on the numbers of barriers affecting the free flow of Europe’s rivers is lacking. Wetlands International – European Association and its member organisation Centro Ibérico de Restauración Fluvial present an inventory of barriers in Spanish rivers including an analysis of the costs and benefits of their removal.

The ever increasing hydromorphological barriers being constructed for flood defence, hydropower and irrigation cause fragmentation and ongoing deterioration of rivers. Fragmentation, or the loss of longitudinal connectivity, poses a threat to the health of river ecosystems. Barriers impede the movement of fish species and sediment, to name but a few problems.

Aside from uncertainty surrounding the scale of constructed barriers in rivers, there is a lack of knowledge on the most suitable and cost-effective measures to overcome these barriers. This report takes stock of the scale of barriers constructed in Spanish river basins in order to indicate the magnitude of the river fragmentation problem. A cost-benefit analysis demonstrates the implications of barrier removal for fish migration and society, based on practical case studies and literature. 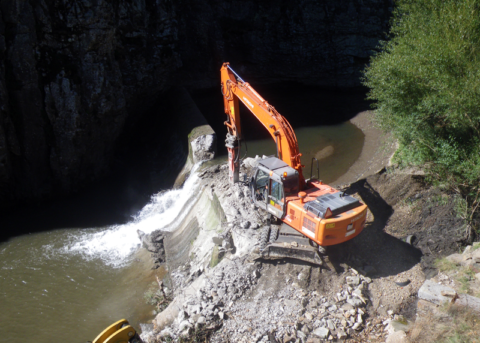 Spain is among the countries with the largest number of dams and barriers constructed in rivers. Over 1,500 large dams are documented of which approximately two-thirds are privately-owned. Current inventories by the River Basin Authorities determine the existence of about 26,000 barriers in Spanish rivers, yet it has been estimated that the actual number approaches 50,000 obstacles. The map shows the collected information on barriers across Spain. 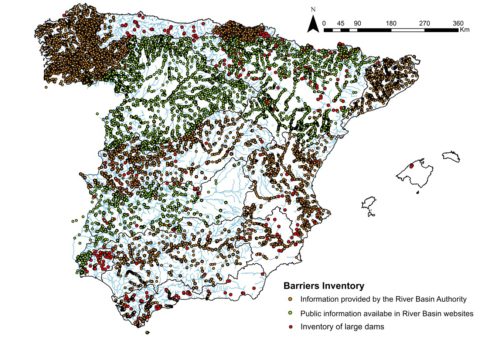 Aside from this inventory, the report provides information on:

We conclude that, although information on barriers has become increasingly available to the public over the years, it remains heterogeneous and incomplete. This keeps public awareness low about the scale of the problem. Authorities experience societal rejection to dam removal, especially when (dysfunctional) dams or weirs are considered cultural heritage. The existing knowledge gap must be addressed to raise public awareness of the benefits and importance of dam removal. This enables prioritization of actions aimed at effective restoration of river connectivity.

Based on six case studies, the report demonstrates the costs and benefits of dam removal and measures to increase permeabilization of obstacles. Similar studies for Spain and other European countries have not been found. We conclude that removal works are cost-effective in comparison with maintenance alternatives, which prove to be more expensive in the long run. These case studies point out several ecological and societal benefits of restoring river connectivity. They include:

Monitoring activities prior to and after permeabilization measures, such as fish passage construction or dam removals, are essential to verify the effects of the measure on the river, on animal and vegetal communities and on society. Some Spanish River Basin Districts have constructed fish passages to facilitate the movement of fish species. However, a large number of the passages are not operational. Furthermore, the longitudinal connectivity of rivers should not be measured exclusively by the movement of fish species. The mobility of sediments is a fundamental issue as well which needs further study. 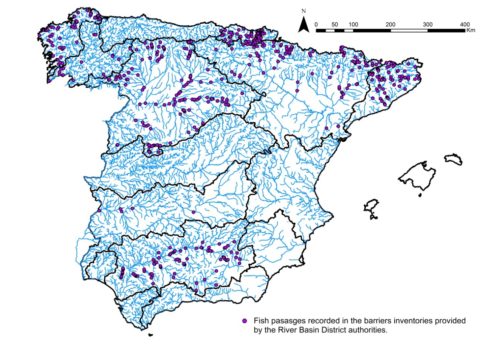 The Spanish National Strategy for River Restoration (NSRR) has strongly incentivised the process of permeabilization of obstacles in Spain. It consists of a program of measures developed by the Ministry of Agriculture and Fishing, Food and Environment (MAPAMA) in line with the objectives set out in the European Water Framework Directive. The objective of the NSRR is to restore the integrity of the ecological functioning of rivers and to make all administrative uses and actions compatible with the conservation of the rivers’ natural values.

The European water directives and Green Infrastructure Strategy provide opportunities to integrate measures such as ecological river restoration into river basin management. These types of measures could significantly mitigate the effects of hydromorphological pressures and improve water quality. Appropriate reform of the Common Agricultural Policy (CAP) could also favour actions for elimination of obstacles in rivers, and the Habitats Directive encourages permeabilization measures in order to improve habitats of native fish communities.

An Analysis of River Fragmentation in the Spanish River Basins

An interpretation of the report can be found on CIREF’s website (in Spanish).