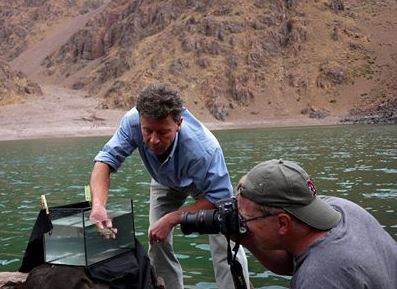 The BioBlitz project, designed by iNaturalist.org, will be hosted on the FFSG website. People from around the world, whether they are anglers, photographers, students or nature lovers, are invited to upload photographs of freshwater fishes observed in their natural habitat, with details of where and when they saw the fish.  Volunteers with expertise in fish taxonomy will serve as curators to identify and verify the species to ensure the data is research-grade.

The information has the potential to assist scientists to describe new species, help assess the risk of extinction for the IUCN Red List of Threatened Species, can track the spread of invasive species and can be exported to freely accessible online data archives, such as Encyclopedia of Life.The launch of the project also highlights the importance of freshwater fish for the protection of internationally important habitats. More than three-quarters of Ramsar’s Wetlands of International Importance are entirely or partly freshwater sites. Of those, over 30 percent became Ramsar Sites because of their important fish species.

There are over 15,000 freshwater fish species and the numbers are continually growing. More than 300 new fish species are described every year on average. Freshwater fishes are possibly the most endangered group of vertebrates. One-third of all species are threatened with extinction due to overfishing, pollution, habitat loss and fragmentation, alien invasive species and climate change. Observations on the ground are essential for identifying and monitoring the conservation status of freshwater fish.

For more information and to get involved, visit the Freshwater Fish Working Group website.