At the occasion of International Day of Action for Rivers, Wetlands International Europe raises concern about plans for the construction of an inland navigation route connecting the Baltic Sea with the Black Sea. The envisaged waterway “E40” would destroy a number of Eastern Europe’s protected wetlands and natural rivers and impose a health risk on millions of citizens. A coalition of wildlife organisations led by APB-BirdLife Belarus, Frankfurt Zoological Society and the National Ecological Centre of Ukraine is trying to prevent E40 from becoming a reality.

The governments of Poland, Belarus and Ukraine are planning to build a new waterway linking the Baltic Sea with the Black Sea. The construction of the E40 waterway, would slice through Polesia – Europe’s largest wilderness – destroying vast wetlands and pristine river stretches. Although a feasibility study has been carried out, local environmentalists say it fails to consider the potential catastrophic loss of biodiversity, carbon emissions from draining wetlands and radioactive contamination of drinking water.

The construction of the E40 involves dredging inside the Chernobyl exclusion zone. This will destroy vast ecosystems and stir up radioactive sludge accumulated on the bottom of the Pripyat river following the explosion. This could potentially contaminate the drinking water of millions of people.

In addition to cutting through the Polesia State Radioecological Reserve (218,318 ha), the planned waterway will have a negative impact on the hydrology of a number of wetlands of international importance and important bird areas (IBA’s). This includes the Middle Pripyat Reserve (98,676 ha), which is designed to protect the largest area of natural river floodplain in Europe covering 120 km of the Pripyat river. Along this stretch alone, 182 bird species have been recorded, many of which are rapidly losing habitats elsewhere. Other important protected areas at risk are the Pripyat National Park and the Polesskaya Valley in the Bug river catchment. 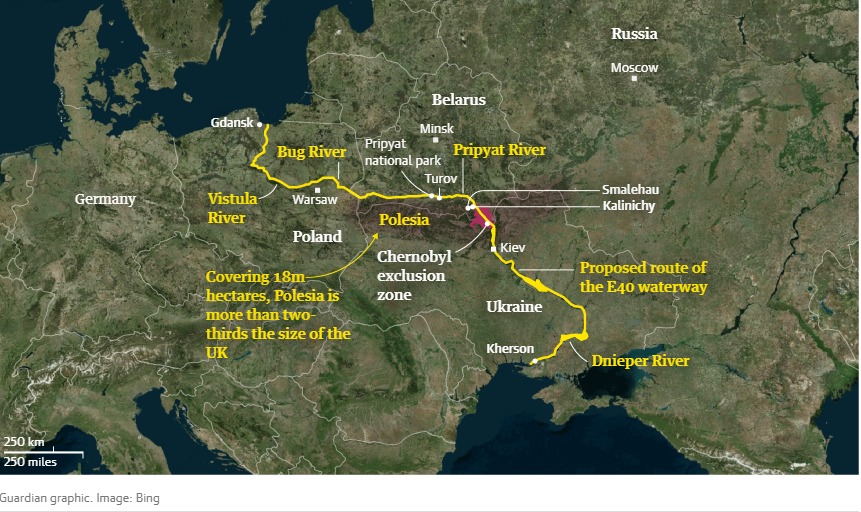 Planned route of the E40. Source: The Guardian

Aside from its devastating impact on the Pripyat, the building of the E40 waterway has large negative consequences for other rivers with high biodiversity values, including the Bug and the Vistula in Poland. These rivers still retain their natural landscape and hydromorphological processes, that allow them to host high biodiversity in water and adjacent land. From the European perspective, these systems are now extremely valuable and often protected by the Natura 2000 network. The Polish government should commit itself to achieving the goals of the EU Water Framework Directive instead of increasing the pressure on these freshwater ecosystems. This requires protection of healthy rivers and wetlands and investment in ambitious, ecologically based river restoration measures and nature-based solutions.

The construction of the costly waterway project cannot be financed by the three countries alone. While the EU has refused to support the E40 project further due to concerns about mounting economic, social and environmental costs, government officials from Ukraine and Belarus have agreed to start dredging the Dnieper and Pripyat rivers.

Meanwhile, in December 2019, the European Commission announced in the European Green Deal measures to increase the capacity of inland waterways to ‘shift a substantial part of inland freight from road onto rail and waterways’. These intentions are incompatible with the Commission’s ambitions to preserve and restore biodiversity in lakes, rivers, wetlands and estuaries. Wetlands International Europe calls on the European Commission to ensure the appropriate integration of environmental objectives in EU transport policies in order to protect freshwater species and ecosystems in Europe.

The Guardian, The race to save Polesia, Europe’s secret Amazon, published 6 March 2020.

At the occasion of the anniversary of the Chernobyl disaster on 26 April, the Save Polesia campaign organisations published the results of a new Expert analysis of the radiation impacts of the ‘E40’ waterway. Key findings are that construction works for E40 inside the Chernobyl exclusion zone could pose increased radiation risk for millions of people and are therefore not feasible. A summary and fact sheet can be found here. More studies and fact sheets are forthcoming, keep an eye on the Save Polesia website.