Native oyster reefs are one of the most threatened marine habitats in Europe, with an estimated decline of 95% since the 19th century. Historic overfishing, habitat loss, disease, pollution and invasive non-native species are all contributing factors in the decline. The Native Oyster Network’s publication, European Native Oyster Habitat Restoration Handbook, presents a “how-to” in the restoration of these native oyster habitats. 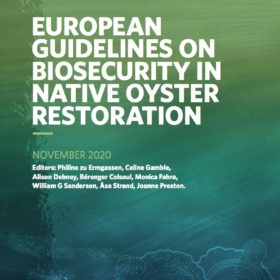