90% of river basins studied in various EU countries will still be unhealthy by 2027, new research reveals. This means those countries will miss the legally binding EU target to return Europe’s dirty waters to health under the Water Framework Directive (WFD).

Member States have only a few weeks left to finalise their River Basin Management Plans (RBMPs) for the next six years, as required by EU law. The draft plans for 2022-2027 are the third round of national plans before the 2027 target and are Europe’s final opportunity to get things right.

The second edition of this report published by the Living Rivers Europe Coalition [1], finds that only two out of the 21 river basins analysed – both in Finland – might see good health by 2027. However, even the plans for those two basins contain gaps, in particular concerning the level of funding. For this edition, eight new draft plans from Poland, Romania and Spain were assessed, none of which are classed as “good”.

Paul Brotherton, Freshwater Manager of Wetlands International – European Association, said: “Healthy rivers are essential to solving our planetary crises. These plans are the best opportunity to revive our rivers to help achieve the biodiversity and climate goals under the Green New Deal. Instead, we see a continued lack of ambition and investment. Many plans insufficiently consider the role of river restoration and nature-based solutions, which can help achieve multiple policy goals in a cost-effective manner. While this is only a small sample, the results are highly concerning as they are likely representative of what’s to come. We urge countries to address these shortcomings and restore our rivers.”

Six draft plans rank poorly, including the two assessed Italian plans, two assessed German plans, the Dutch Rhine plan, and the International Odra plan. Most of the river basins suffer from a lack of national budget allocated to water management, insufficient integration of water protection into other policies – in particular energy, agriculture and infrastructure – and the multiple misuses of derogations – all issues that were already flagged in the 2019 Fitness Check conclusions of the WFD evaluation and have been repeatedly highlighted since then.

The performance of the draft RBMPs is “poor” for nearly half of the analysed indicators, including pollution, excessive water extraction, blockages like dams, poor flood and drought management, agriculture, hydropower, coal mining and missing nature-restoring measures. EU countries – which have until the end of this year to publish their final RBMPs according to the Water Framework Directive– must address the shortcomings identified in the draft plans to change the future for our freshwaters and meet the 2027 goal.

We are also very concerned that as of September 2021, at least nine Member States (Bulgaria, Croatia, Cyprus, Greece, Ireland, Portugal, Slovenia, some river basins in Spain, and the UK [2]) had not yet presented their draft plans for all river basins. 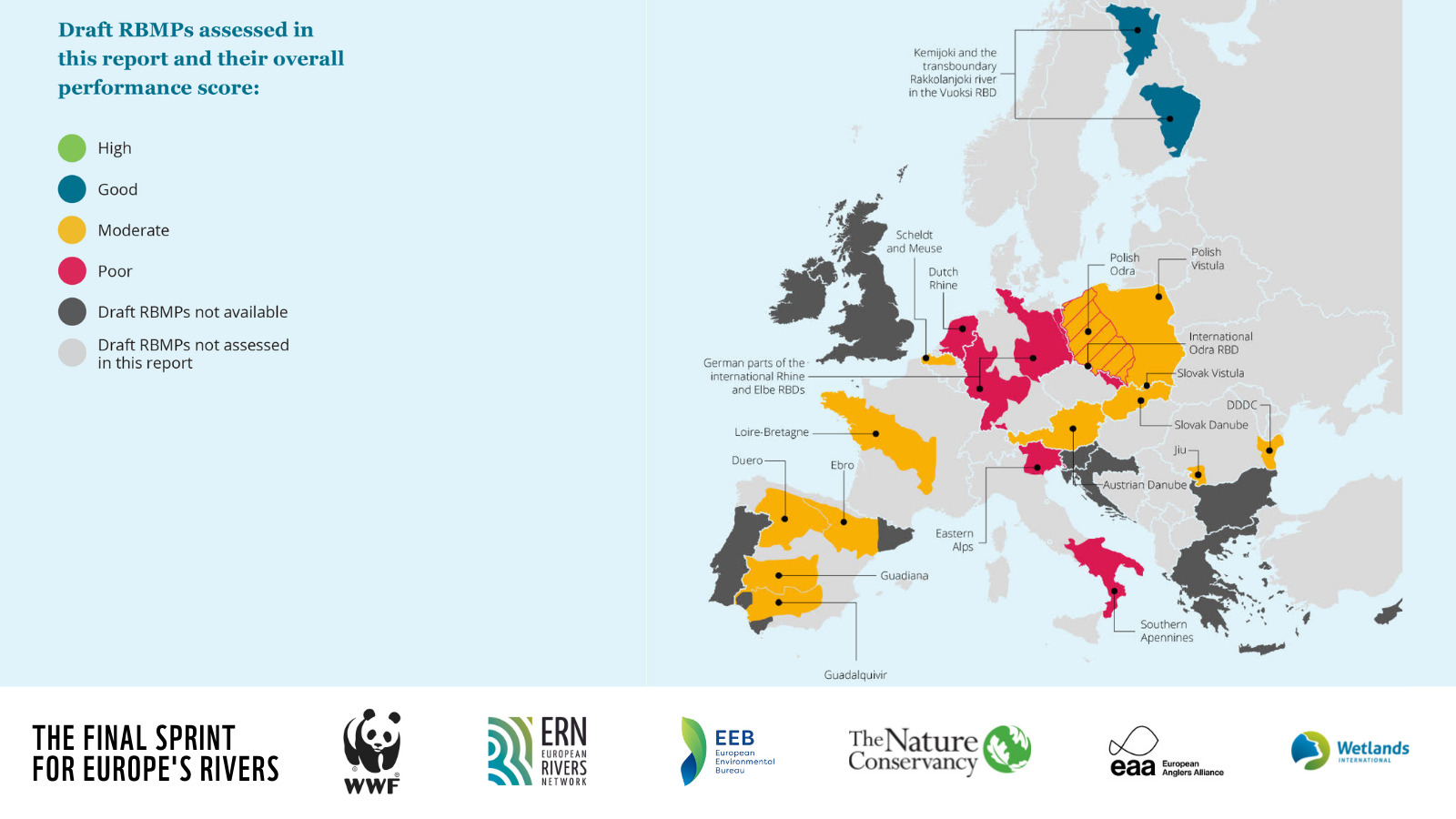 [2] As the Directive was signed by the UK government prior to the UK’s split with Europe, it has been transposed in to UK law and therefore continues to apply.