Road construction through the Almany Mires in Belarus is devastating Europe’s largest intact mire complex. Wetlands International – European Association is calling on the Belarussian authorities to protect the Almany Mires from degradation and ensure their sustainable use for people and nature.

Beside a Ramsar site, the Almany mires are designated as an Important Bird and Biodiversity Area (IBA) and a Landscape Reserve of Republican Importance (Zakaznik) as well as an Area of Special Conservation Interest of the Emerald network under the Bern Convention. Moreover, preparations for designating the area as a UNESCO World Heritage Site have recently started with the support of Frankfurt Zoological Society.

Despite the protection status, plans for what is officially called ‘Forestry road #3’ quietly received an official stamp of approval in a ministry office in Minsk two years ago. The procedure of Environmental Impact Assessment of the road construction plans has been conducted without public participation. Construction work began without fanfare in August 2017.

Earlier this year, by chance, conservationists were alarmed to discover that bulldozers are ravaging the area Belarus’ Almany Mires (Al’manskija baloty) to construct 23 km of road with at least 6 km planned over ancient bog. The road is being  built on sand dikes by the Polesskij Forestry Administration. 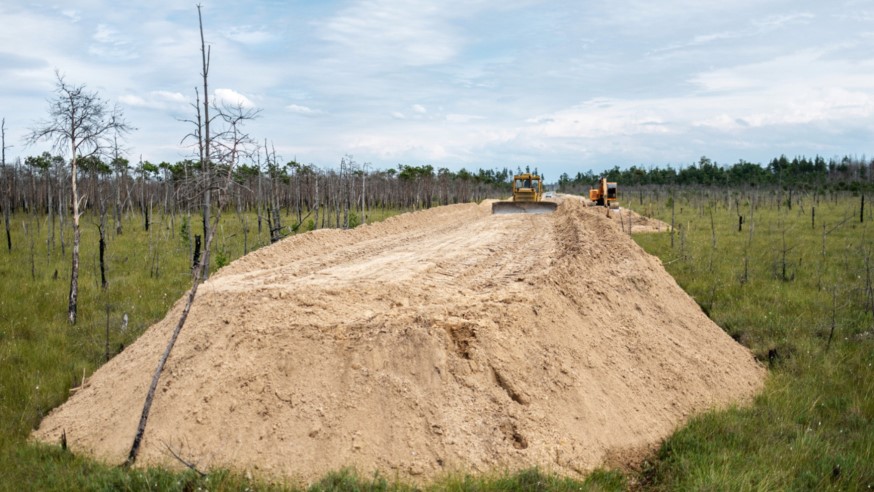 The road will undoubtedly alter Almany’s unique landscape. Next to making the area accessible, the road will most likely act as a dam: on one side, the area will collect water, gradually turning the mires into open water; on the other side, a lack of water will destroy the mires.

Mire scientists and conservationists associated in the International Mire Conservation Group (IMCG)  have reviewed the project based on available information and call for reconsideration of the plans and cessation of the project. The unique international values of the Almany mire arise from its naturalness and intactness, which will be strongly be affected if the project is implemented as planned.

Conservationists are concerned about the road’s impact on the mires’ Greater Spotted Eagle population. Belarus is one of the few countries where this globally Endangered Short-toed Eagle can still be found and Almany hosts the country’s biggest population of 18-20 pairs. The area is also home to other endangered (water)bird species like the Black Stork, Great Grey Owl and the Common Crane.

Mires, bogs and fens are among the most threatened ecosystems in Europe, having been subject to major losses in recent decades. They are highly important for a wide variety of species and provide a range of benefits to people, including water storage and regulation and carbon storage. Yet, the lack of awareness of wetland values is a key driver of wetland and biodiversity loss and degradation. Wetlands International – European Association has identified threatened habitat types such as mires as priority habitat to raise the profile of these wetlands.