The Sava River is one of Europe’s ecologically and culturally most interesting lifelines and increasingly threatened by infrastructural development. At an event at the European Parliament today, Wetlands International – European Association’s member EuroNatur and representatives of the SavaParks Network discussed threats and restoration potential of the Sava basin. The event was hosted by Mr Igor Šoltes, MEP, The Greens/EFA and Mr Ivan Jakovčić, MEP, ALDE.

The Sava river is the most voluminous tributary of the Danube, connecting four countries and more than eight million people who live in and from its catchment area. Five riparian areas totaling 74,888 ha have been designated as Ramsar sites and most parts of the Sava river in Slovenia and Croatia are included in the EU Natura 2000 network.

The debate sought to propose solutions for the implications of intensive agriculture, urbanization, hydropower production (582 dams are planned and 11 are under construction), inland water navigation, as well as the lack of restrictive policies for dredging, flood protection schemes and climate change. These developments impact the river basin’s characteristic biodiversity and rich ecosystem functions.

European water policy requires improvement of the ecological condition of water bodies, as highlighted in the exchange on the Water Framework Directive with DG ENVI, represented by Mr Hans Stielstra, Deputy Head of Unit for Water. At the same time, there is an increasing demand for flood protection, recreational use and transportation capacities. The discussions aimed at answering the key question: how can these conflicting commitments be reconciled?

The answer is not an easy one but the event pointed out the extensive restoration potential of the Sava river basin, which can deliver on several policy objectives simultaneously. Safeguarding and restoring wetlands, such as river floodplains, will be vital to achieve both water policy objectives as well as to enhance biodiversity, reduce water-related disaster risks, address climate change mitigation and adaptation, and reduce land degradation.

Gabriel Schwaderer, CEO of EuroNatur, presented the ‘White Book – The Sava River Basin – its ecological character, main threats and restoration potential’. This study was done in the context of the “Save the Blue Heart of Europe” campaign. He said: “this White Book has something truly unique. It is the first study offering suggestions for area-specific ecological flood control and river restoration projects. In other words, we show where former alluvial areas could be naturally flooded once again and in which sections the Sava’s river bed should be given more space. This White Book shows how it could be done”.

The analysis on the Sava river basin emphasizes the utmost importance of working in accordance with nature instead of against it; a concept Wetlands International strongly believes in. Planning should respect the limitations and possibilities of the characteristic natural conditions that the river basin offers. Above all, investments should be risk informed and consider that any changes in the upper reach of the river have implications for the middle and even the lower course. 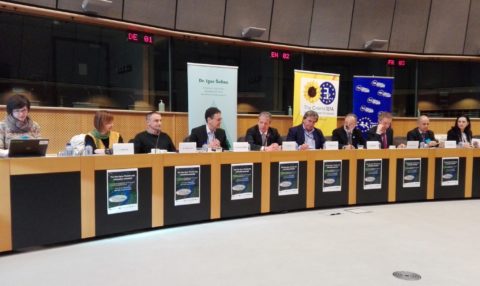 Mr Šoltes, MEP, The Greens/EFA, stated that “the main challenge is how to find the right balance between the exploitation of hydropower and environmental protection. The requirements of natural environment and the generation of hydro power are compatible if the correct methods in planning, implementation and follow-up are used. When deciding where to build hydro plants, we need to achieve an open and true dialogue with all relevant stakeholders, including the local communities and environmental experts. We need approaches that can contribute to meeting demands for low-carbon energy while striving to protect rivers that are important for environmental, cultural and also economic values.”

Ivan Jakovčić, MEP, ALDE said: “Protection and exploitation of resources of the Sava River is a typical example of an area where EU macro-regional strategies must show their full efficiency. Countries, through which river Sava flows, are an integral part of the EU Strategy for the Danube region, and the EU Strategy for the Adriatic and Ionian macro-region. This means that we already have in place a mechanism by which, in a quality manner, we can encourage and finance numerous projects in the field of environmental protection, tourism, transport, and energy infrastructure. All these projects have to be in friendship with the environment and, thus, contribute to the satisfaction of the citizens who live along the Sava River.”

Read the press release in Slovenian and German.