Our member, Euronatur Foundation, is campaigning to protect the Ulcinj Salina in Montenegro.

The Ulcinj Salina is a large wetland area, which is home to more than 250 bird species. For more than 90 years, Ulcinj Salina has been a success story of wise use of wetlands for salt production, which has benefited local people and migratory birds. However, after the privatisation of the salt production in 2012, the investment fund Eurofond, started looking for investors to sell Ulcinj Salina and build a luxury hotel resort on the land. Since then, no more salt has been extracted, and the all-important water management abandoned.

International support for protection of the site is steadily growing. On the 29th November 2018 the European Parliament adopted a resolution on the EU accession process, which while recognising the positive developments in Montenegro’s environmental legislation, urged the Government of Montenegro to specifically protect Ulcinj Salina, both at national and international level.

Although the Government of Montenegro is aware about the ecological and economic importance of Ulcinj Salina, it did not show any interest in protecting the site and preventing its degradation. Therefore, Euronatur Foundation together with BirdLife International, CZIP and MSJA, set up the international campaign #SaveSalina to call on Mr. Duško Marković, Prime Minister of Montenegro, to:

The core message of the campaign is to support the conservation of this beautiful wetland close to the Adriatic coast and restore salt production in order to help nature and people.

From 1935 to 2013, Ulcinj Salina has been a great example of wise use of wetlands. Every year up to 40 000 tons of salt were produced providing livelihood to more than 400 people. The salt extraction process is complex but fascinating. The salty seawater is channelled through large basins, part of the water evaporates, and the salt content in the remaining water increases. Finally, it is just the salt crystals which remain behind.

When in 2013 salt extraction was stopped, all the workers were dismissed and consequently, dikes and channels in the salina rapidly deteriorated due to scarce water and infrastructure management.

Ulcinj Salina represents one of the most significant resting, overwintering and breeding wetland habitat for numerous waterbird species in the whole Adriatic region. Each year, thousands of individual birds, and more than 250 different species, including Great Flamingos, Black-winged Stilts and Dalmatian Pelicans which come to feed in its shallow waters. Ulcinj Salina is also a habitat for many endangered species of fish, amphibians and reptiles, as well as saline plants. However, no conservation measures have been taken to preserve its natural value. Thus, it is fundamental to make sure that Ulcinj Salina is recognized and protected also under national and international law.

As Eurofond is attempting to sell the Ulcinj Salina as a potential site to build a luxury resort, actions like the #SaveSalina campaign are urgently needed.

The campaign stresses the importance of keeping Ulcinj Salina as property of the Montenegrin people to support the economy of the country. By re-establishing salt production, the Salina can provide employment to many people and it could offer a multiple range of development opportunities such as eco-tourism.

Have you signed already? 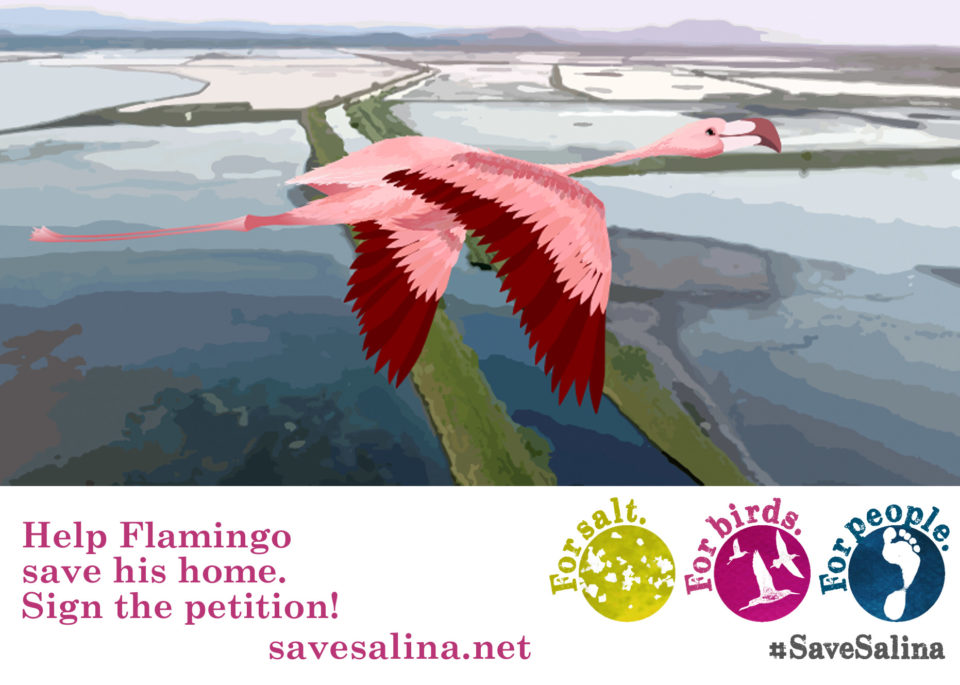