Freshwater fish currently face many threats and pressures in Europe that greatly affect their ability to survive and reproduce. According to the European Red List of Freshwater Fishes, 39% of the freshwater fish species in the EU are threatened and a further 4% are near threatened. Furthermore, about 90% of the fish species listed on Annex 2 of the EU Habitats Directive are in bad or poor conservation status, according to the European Environment Agency’s (EEA) ‘State of Nature in the EU’ report. Migratory freshwater fish species are particularly at risk, with population numbers falling since 1970 in Europe at the highest rate globally, according to the Living Planet Index report.

Some of the main causes of the decline of freshwater fish species are modifications of hydrological flows, physical alterations of waterbodies and various barriers, including hydropower and navigation dams, dikes and roads. These barriers are very widespread within Europe, with more than 1 million estimated to be present in European rivers. Migratory fish are especially sensitive to these barriers, which block their pathways and disrupt the habitat connectivity they require throughout their life cycle.

This is based on the ‘flyways’ approach used over the past 50 years for the conservation of migratory birds. The flyways concept describes the entire area utilised by birds during their annual migratory cycle. The joined up nature of the flyways concept has resulted in internationally coordinated joint conservation efforts, such as the establishment of the Convention on Wetlands of International Importance in 1971 and various flyway instruments such as the Agreement on the Conservation of African-Eurasian Migratory Waterbirds. The swimways movement is inspired by this success, aiming to transfer the lessons of the flyway approach to the protection of migratory freshwater fish.

While there are local conservation initiatives for certain species or river restoration, there is a need for a more joined-up approach for conservation of migratory fish across all of Europe. This is especially the case for long-distance migratory fish whose migration paths can pass through multiple countries. The name is also a reference to the Trans-European Transport Network, a major EU infrastructure programme responsible for disrupting swimways through the development of waterways and the associated infrastructure and river management activities.

The Trans-European Swimways network will bring together stakeholders such as NGOs, researchers, angler associations and management authorities to collaboratively work on the topic of migratory freshwater fish. It will encourage transboundary cooperation, information exchange, joint projects to improve available information and advocate for stronger legislation.

To learn more or to get involved, visit the Trans-European Swimways Network page. 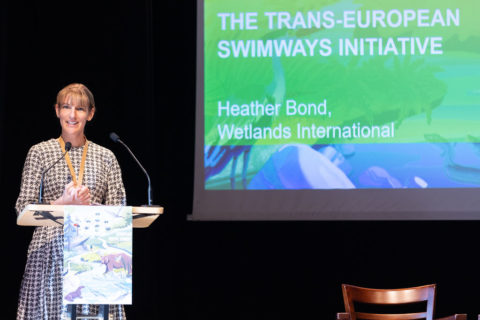 Wetlands International Europe brings together ten European NGO members from seven European countries, working together to raise awareness about wetland ecosystems and to advocate the sustainable use of wetlands for people and nature, in particular by linking science, policy and practice. All our member organisations focus on certain wetland ecosystems and their biodiversity, giving attention to particular threats, developing and trailing practical solutions and informing policies.