In tune with the “trees will save us” mantra, the EU has recently published a variety of legislation on deforestation. Yet, while it is encouraging to see policy makers finally recognising the value of forest ecosystems and the role of the EU in importing commodities linked to deforestation, it is worth diving into what this new legislation will mean for Europe’s already-strained wetlands and all their climate, biodiversity, flood prevention, and livelihood values.

What is challenging about the topic of forests and wetlands is that they are often put in opposition to one another. This might have been the case if you were living in Scotland during the 1970’s where large-scale drainage of peatlands was justified on the back of conifer forest plantation. But, in Indonesia, peatland degradation is often directly linked to the loss of native swamp forest for palm oil plantation. In the case of mangroves, tree planting can either create healthy wetlands or cause issues for them when planted in the wrong place. Today, more than ever, is the time to step out of this binary thinking and recognise the intimate and nuanced connection between forests and wetlands, which means that legislation for one must also consider the other.

Some of the recently announced EU policies include the Biodiversity Strategy for 2030, a revised Land-use, Land-use Change and Forestry (LULUCF) legislation, and the EU Forest Strategy. The European Commission also just pledged €1 billion to protect the world forests during the COP26 negotiations in Glasgow earlier this month.

Initially, what we see in all these initiatives is that there is a disproportionate move towards forest ecosystems when compared with wetlands. This is concerning because, while forests are themselves declining at an alarming rate, wetlands are disappearing three times as fast as forests. We simply cannot afford to lose our fresh water sources and purifiers, our flood protectors and fire buffers, our carbon stores, migratory bird habitats and our agricultural and fishery backbone.

One example of this unequal treatment can be seen in the new LULUCF proposal. Where forests have their own separate emission accounting category, peatlands fall under the various headings, cropland, grassland, and wetland. This division of peatlands into different categories obscures the fact that drained peatlands account for roughly 25% of the total agricultural emissions in the EU, despite only taking up 3% of the land-surface area. Furthermore, according to this proposal, mandatory wetland accounting will not come into force until 2026, giving Member States five more years to degrade their wetlands without consequence.

Meanwhile, in the EU Forest Strategy for 2030 it is alarming to see that there is not a single mention of wetlands or peatlands throughout the text. This is particularly worrisome when it comes to the Commission’s pledge of planting at least 3 billion additional trees by 2030. Without a clear definition of where and how this should be done, this large-scale tree planting project could lead to a similar destruction of wetlands as was the case in Scotland in the 1970’s.

This is also the case when it comes to the EU’s external forest policy, like the 1 billion euro contribution to the Global Forest Pledge at COP26. While is true that greater protection of tropical rainforest in the Democratic Republic of the Congo could help safeguard the world’s largest peatland that lies underneath, the danger of excluding wetlands from this forest legislation is that potentially strong synergies can easily slip into conflict.

On a more positive note, the EU’s Biodiversity Strategy for 2030, which looks to enlarge the existing Natura 2000 areas and invoke strict protection in areas of high biodiversity and climate value, does explicitly refer to the role of peatlands and wetlands as nature-based solutions to climate change, and the need for restoring free flowing rivers and floodplains for adaptation. However, it is still to be seen whether the European Commission will translate this wetland ambition into their legally binding 2030 nature restoration targets.

This new policy horizon has the potential to pave the way for an integrated landscape approach for both forests and wetlands. Yet, currently, while see many budding EU policies pushing for the protection and restoration of forests, the same cannot be said for wetlands. Thus, it is vital that forthcoming legislation, such as the Carbon Farming Initiative, and the communication on Restoring Sustainable Carbon Cycles, do not fall into this same siloed and binary thinking and ignore the vital role of wetlands to restore biodiversity, cool our climate, and sustain our societies. Wetland systems teach us that complexity and co-creation are the roots of resilience. So, despite the well-rehearsed mantra, tree planting alone won’t save us. But transforming our approach towards trees just might.

A brief timeline of some key EU deforestation initiatives and legislation: 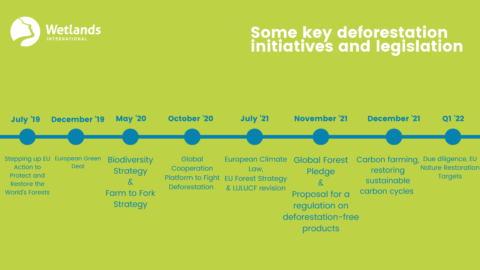