Paludiculture – the practice of farming on wet and rewetted peatlands – can provide a win-win for farmers, the climate and biodiversity. The Michael Succow Foundation, a partner of the Greifswald Mire Centre and Wetlands International European Association member, recently organised an excursion to a paludiculture site in north-east Germany. During the excursion, experts showed EU and national politicians the potential of this kind of innovative farming and its ability to contribute to achieving the aims set out in the newly proposed EU Nature Restoration Law as well as other EU policies – both in Germany and other EU Member States. 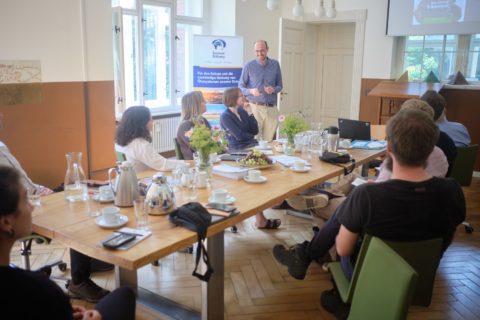 Jan Peters, director of the Succow Foundation, gives a presentation on peatlands and paludiculture.

German Member of the European Parliament (MEP) Delara Burkhardt (S&D) and Member of the German Bundestag (MdB) Anna Kassautzki (SPD) attended the event, which took place on 19 July 2022 and included presentations on some of the facts and figures on these wetland ecosystems and the potential of paludiculture as an incentive for rewetting drained peatlands. The meeting, for which Wetlands International’s participation was supported by EU LIFE programme funding, included a tour of Greifswald Mire Centre’s peat moss garden and experimental facilities. Peat moss (sphagnum) can be grown and harvested on rewetted peatlands, especially bogs. It can be dried and processed for use as horticulture substrate to replace fossil peat in gardening. 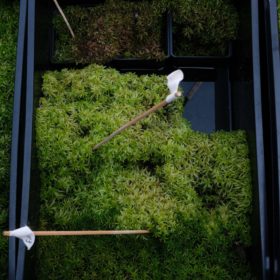 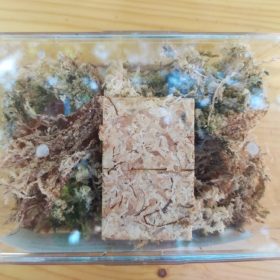 Sphagnum (left picture) in the moss garden at the Greifswald Mire Centre and a box containing the moss in its dried form and when processed for horticultural substrates.

This was followed by an excursion to a paludiculture site to see in practice how farmers can earn a living from cultivating rewetted peatlands. 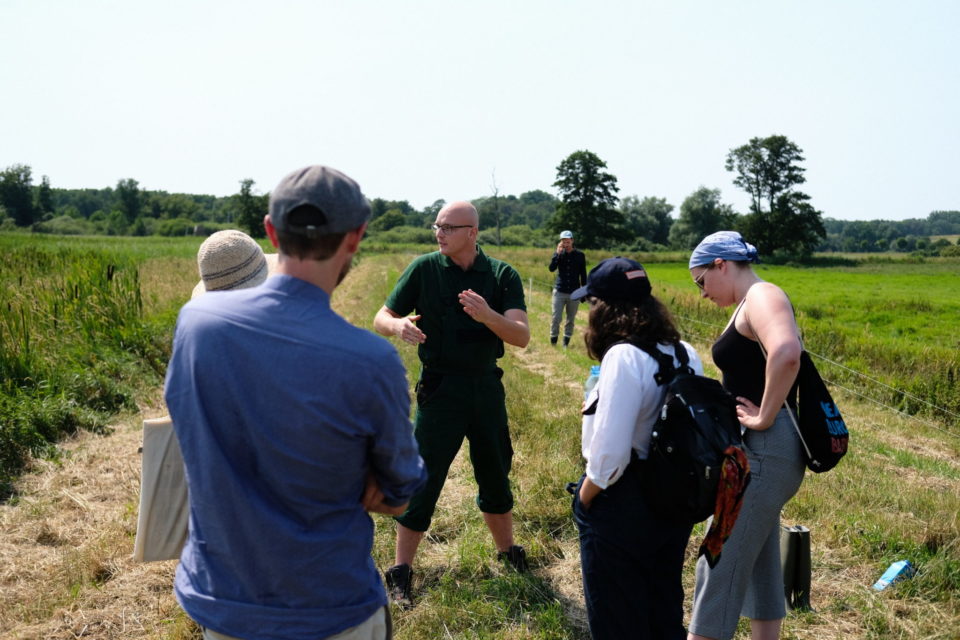 Farmer Henning Voigt explains how he manages the rewetted peatland and its use for paludiculture.

The fen site, near Malchin in north-east Germany, is managed by young farmer Henning Voigt. With the scientific support of the Greifswald Mire Centre, he cultivates typha (also known as cattail), a flowering plant which can be used in construction as boards or a natural insulating material. 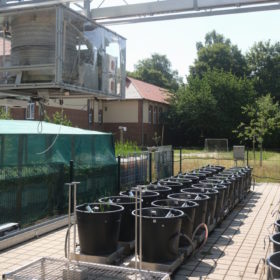 Peatlands store enormous amounts of carbon and are home to wide range of biodiversity. Traditionally, however, farming practices have focused on draining peatlands to gain more space for cattle grazing or growing crops such as corn or potatoes.

This has hugely negative implications for the local wildlife including the many species of plants, mosses, insects, birds and mammals that depend on them. Drained peatlands also lose much of their ability to store carbon, contributing to climate change. The EU is estimated to release as much as 270 Mt CO2 equivalent per year from agriculture on peatlands, globally second only to Indonesia. Restoring these wetland ecosystems, especially peatlands drained for agricultural use, can therefore play an important role in mitigating climate change, as rewetting has the potential to prevent the release of these enormous quantities of emissions, contributing to the aims set out in the proposed EU Nature Restoration Law. It could also potentially sequester carbon in the future. 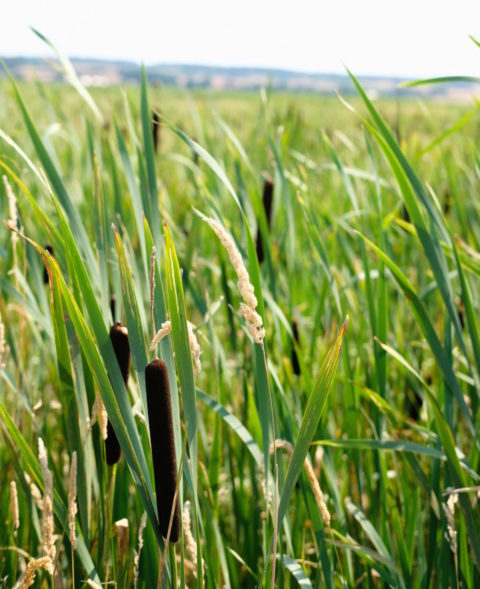 Cattail cultivation at the paludiculture site.

Acting like huge sponges, peatlands hold water all year round, including in the summer, providing a local cooling effect and therefore contributing to climate adaptation. Their ability to absorb water, including excess rainfall, means they play an important role in avoiding disasters such as floods.

The event attendees also discussed the EU Nature Restoration Law proposals, recently published by the European Commission, which sets targets for the restoration and sustainable management of a wide range of ecosystems and species, including peatlands.

The draft law sets specific binding targets for the rewetting of peatlands drained for agricultural use. This would be a welcome inclusion, when passed into law, that could contribute to improving the state of these important ecosystems across the EU over the coming decades. The draft highlights the role of paludiculture as an option for farming on peatlands that have been rewetted. 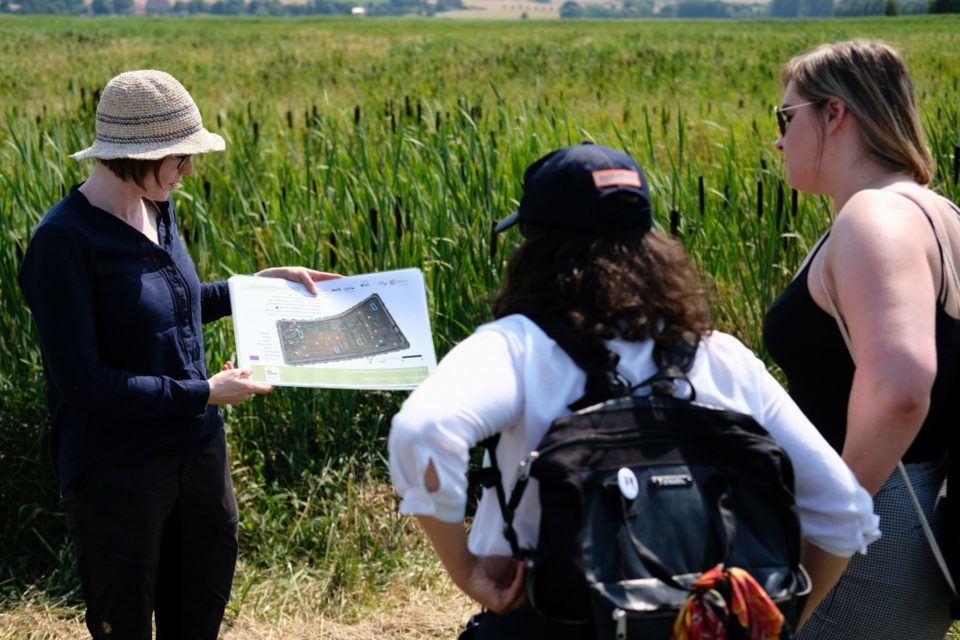 The proposals, published by the European Commission on 22 June, contain targets for the restoration of 30% of drained peatlands under agricultural use by 2030 and 70% by 2050. While this is welcome, a first analysis within the conservation community indicates the proposals do not go far enough. Recent analysis by Ramsar shows that to curtail global warming to 1.5°C above pre-industrial levels all drained peatlands need to be rewetted by 2050. 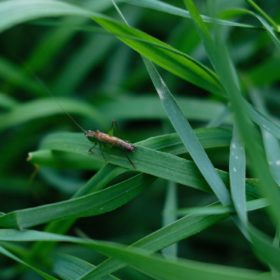 As the excursion demonstrated, the rewetting of previously drained peatlands can benefit not only the climate, in terms of carbon storage, and biodiversity; it can also contribute to disaster risk reduction and benefit farmers, who can draw on the unique properties of these wetland ecosystems to access the new economic opportunities provided by rewetted peatlands. As such, paludiculture can provide an important vehicle for the implementation across the EU of the peatland related targets set out in the new Nature Restoration Law proposal.